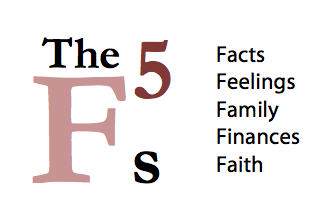 Friends, it’s not often you recall a sermon from over a decade ago, let alone its exact structure. For example, I really only remember one sermon from my four years at Moore College; a student chapel talk by Ray Galea. It changed my life. But that’s for another day!

The sermon I remember today was not delivered by an ordained minister. It was a talk delivered by a heart surgeon at Royal Prince Alfred Hospital down the road from Moore College, in 1992, as I attended a short course on hospital chaplaincy and ministry to the ill.

It’s the age-old problem of how to say what needs to be said when someone gets the bad news that they are seriously ill and it’s likely they will soon die. Courage can be in short supply. We don’t want to upset family relations or a good friendship. We don’t want to just scare a person so vulnerable in their sickness. But we know eternity is on the line.

To be honest, some ministers can be mealy-mouthed about it. But here’s what this Christian heart surgeon told us he said to his patients when they were facing high-risk surgery to address life-threatening illness. He called it the 5Fs.

Be honest about what the doctor is saying. Be ready to accept an accurate diagnosis, not a sugar-coated one. Don’t dress it up with false hopes.

It’s normal to feel a whole range of emotions: confusion, disbelief, anger, despair, regret. The way to deal with the feelings is not to deny them, but to acknowledge them and work through them. The stiff-upper-lip rarely works.

Say what needs to be said. Avoid that terrible situation where no one will talk about the horrible reality that’s staring you all in the face. Don’t risk dying without saying you love them and resolving unfinished business if you can.

Put your affairs in order. Ensure you have a proper will and insurances are up-to-date etc. In particular, the surgeon stressed caution before sinking large sums of money into experimental or alternative treatments in desperation for an unlikely cure, which might leave your family impoverished.

The surgeon would say something like this: I don’t know exactly what you believe, but most people hope there’s something more after death. I encourage you to consider this question of faith. If you don’t have a spiritual adviser or minister of your own, I am a Christian and I’d be more than happy to discuss these matters with you.

It’s up to the other person to make the next move, although sharing a sensitive booklet or Bible reading you’ve found helpful might also be suitable at the moment of the fifth F.

You might think the five Fs sound a bit contrived. But I only heard it once and never forgot it. I’ve found it a great memory aid for being helpful to the seriously ill – both as a minister and as a Christian friend or relative. I’ve never had the advice scoffed at.

Maybe you’ll remember the 5Fs too, for a time you or a friend really needs them.

(Lightly edited and reprinted from 2010) 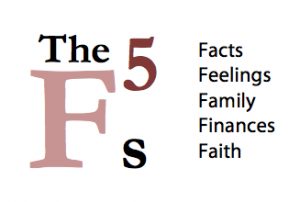